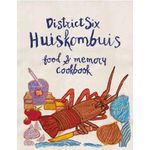 Food & Memory Cookbook – Tina Smith
The District Six Huis Kombuis cookbook commemorates the rich fusion of food and cultural heritage in District Six through personal stories, recipes, historical images and craft work. The book is a culmination of memories and narrative. It weaves through the days of a typical week in District Six, focusing on traditional family recipes that were prepared with love and often limited resources. This is a visual celebration of the vibrancy and warmth of the community – who foraged, preserved, baked and cooked together. Portraits of 23 former District Six residents, accompany recollections of lives lived in a significant time. Artefacts, food and anecdotes bring the spirit of District Six alive again.

A beautifully produced book, with a wealth of historic photographs of the people and the place, as well as tempting pictures of the traditional cooked dishes. The book preserves simple food, family favourites recipes. I also particularly liked the hand embroidered panels that accompanied some of the recipes – to see recipes carefully and beautifully embroidered onto fabric – that’s something special!

I enjoyed the stories, all part of Cape Town’s history and heritage. Meeting the tannies and oumas, matriarchs and patriarchs, of a little district in the heart of Cape Town’s CBD is special. I’m glad they’ve not been forgotten, despite the Apartheid Government’s attempts to remove them from society.

Highly recommended for those interested in traditional Cape recipes, history, and craft.