I had a TBR purge. Realising that we are now almost at the end of October – OMG! what happened to 2018 ? – and the TBR pile has, if anything , increased, never mind decreased as per plan: well! Nothing else to do but unleash my scythe and hack vigorously.

A brand new history of the Silk Road, with miniscule print. Out.
Two books of wandering through Alaska. Unread for two years. Out.
A Japanese novel, bought three years ago. Out.
Two Paul Theroux travel books, big fat ones. Out.
A solid brick of an Indian novel with miniscule print. Out.
A scholarly book on Tantra. Out.
And so on.
The Library Book Sale Table is going to benefit.

I have moved the TBR pile from the depths of my cupboard of shame, and loaded the books onto a highly public, visible shelf. I tell myself that if they’re under my nose, this will remind me to start reading. And I’m sternly promising myself that when I’ve finished the entrancing The Overstory by Richard Powell, I will take a book off the TBR shelf, come what may!
And I will not, absolutely not, buy another book this year. Despite my good resolutions in January, I have already bought 15 new books this year. My credit card has smoke pouring out of it.

I had intended to read one TBR per month. Thus far the total stands at a modest seven. Along the way, I became distracted by other treats and temptations. What can I say ?

I wonder how your bookish resolutions have worked out thus far? And whether you have made any progress on the TBR pile? Please tell me I’m not the only backslider!

I first heard of Postcard Stories on the Postcrossing blog, last year. What an intriguing idea! A collection of stories, one per week, written on a postcard and mailed to a friend. As an offshoot of this idea, I am part of a tiny group of Postcrossers who have been exchanging postcard stories, written and illustrated by us. I enjoy writing flash fiction, so the project has been fun.

I resisted buying the book for more than a year, and then birthday book vouchers gave me the opportunity. I have to say I am disappointed by the book. Not so much by the contents, but by the design. I’d been anticipating a colourful book, showing the postcard pictures, as well as telling the stories. But no. There are no pictures or photos of Carson’s mailed cards, not even as a few colour plates in the middle of the book. Instead there are six drab grey wash illustrations by a Benjamin Phillips, and that’s it. What a missed opportunity! Should the book ever go into a second edition, I hope serious consideration will be given to making the format more postcard related.

I was also baffled by the story layout. Each page starts with a page heading for e.g. Week 24 – June 13th, 2015, followed by a location : BOTANIC AVENUE, BELFAST and then a name e.g. Glori Gray but there’s no indication if the named person was the recipient of the postcard, or perhaps the artist or photographer who created the picture on the front of the card, or any explanation as to whether the location was significant to the writer? Or the recipient? Or in some way related to the picture on the card.

I would have liked to see the picture on each card, accompanied by a brief note as to why the location and recipient were chosen.
The blurb on the back cover tells us … In this collection of highlights, Carson presents a panoramic view of contemporary Belfast …. Through a series of small but perfectly formed snapshots of her home.

Few of the stories were related to the location in the header, so yet again, I was left puzzled and unsatisfied. I’ve never been to Ireland so obviously the nuances of place would escape me completely.
Given the disappointments of the book, it’s fortunate I’ve gained so much by being part of the Postcrossing Story card project. 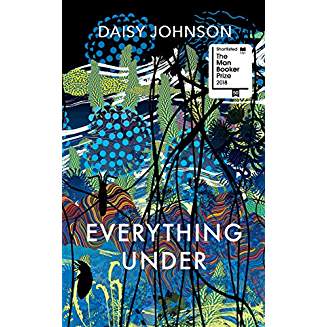 In the course of a life-long reading career I’ve read many fictional and true accounts based on the theme of identity, family and belonging, but I can unhesitatingly say that I’ve never read anything like Daisy Johnson’s novel, from the perspectives of plot, structure and writing quality. I can quite see why it’s made the 2018 Man Booker Prize shortlist.
The narrator is Gretel, who has finally tracked down her mother Sarah after years of searching. Sarah is suffering from the onset of dementia. So far , so clear; but thereafter events and people become confusing: who is Marcus? Who is Margot ? who is Fiona? And yet again, where is Sarah ? Sarah not only wanders away from Gretel’s cottage, but her mind and her sanity wander with frequency, making the story fluid, just like the River which serves as a connecting thread to the story, as well as a somewhat ominous backdrop.
For thirteen years Gretel and Sarah lived on a barge moored on The River, and we are introduced to Charlie and also to the creepy Bonak. Who or what is the Bonak? at the end of the novel we discover the answer via a detour into magical realism. I’m happy with magical realism as a writer’s tool, but in this instance, it didn’t sit comfortably with me.
The basic premise of the novel is a re-imagining of the Oedipus myth  but Daisy J took the bold step of feminising the myth: the protagonists are all women – apart from the slain father, that is. The book also introduces the element of transgenderism.
It would be fair to say the novel is complex in plot and structure. You need to have your wits about you when you read it – well, I certainly did! And I’m glad I’d read a number of reviews before I tackled the book.
I loved the writing. Daisy J writes with a primal energy about The River, and about the natural world, and for me, The River was as much a character as the human actors in the tale.
I know the book will remain with me, I nearly wrote ‘haunt me’ for some time to come, but that’s an over dramatic statement in my case, although other reviewers found the book ‘disturbing’. In fact, the more I think about it, there’s a dark undercurrent to the story which is what makes the book so powerful.

I can’t wait to see what Daisy Johnson comes up with next!
Highly recommended and Not to Be Missed.

I haven’t read a Paul Gallico novel in I don’t know how many years. Coronation was first published in 1962 and referred to the enormous event of 2 June 1953 when Queen Elizabeth II was crowned queen of Britain and the Commonwealth. At the time I recall receiving a souvenir tin of toffees with a colour portrait of the new Queen, glittering in a jewelled crown, and looking oh so beautiful! I would have been 11 years old at the time. Rhodesia – where I was then living – was still a member of the Commonwealth and I have a dim memory of the excitement and the local festivities, but, obviously, the events were very far away.

Paul Gallico makes it immediate and personal in his short novel. He focuses on the momentous events of Coronation Day in London, as experienced by a working class family who make the journey from industrial Sheffield in the North to watch the procession go by and see their new young Queen. Burly Will Clagg, a foreman at the steel-works, his wife Violet, mother-in-law Granny Bonner, plus their two kids: Johnny aged 11 and 7 year old Gwendoline. The family sacrifice their beloved two- week seaside holiday in favour of the London trip to see the Queen. There’s a long train trip down to London, and of course, it’s raining – this is England, remember.
The day does not turn out as expected, but by the end of it, each family member has gained a precious memory of the event, that is meaningful to them. Even grumpy old Granny Bonner.

Despite the shortness of the novel, Gallico packs in an enormous amount of emotion ranging from excited anticipation, through disappointment and despair, and ends with an unexpected bouquet of wondrous enjoyment and satisfaction. Gallico was a prolific novelist, and has the experienced skill to make his characters come alive on the page, and in the reader’s memory. The story is heavily patriotic, so imagine my surprise when I Googled Gallico, to discover he was an American! And, initially, a sportswriter! He had me fooled. I assumed he was a true-blue Englishman, patriotic to the core. Such is the power of a talented storyteller.
To my surprise, I discover the book is still available, on Amazon. The only reason I came across the battered old copy was that a friend found it in a box of charity donations, fished it out, and asked if I would like to read it. It languished on my shelves until I was looking around for a short read, and picked it up.
Years ago I was enchanted by Gallico’s hit novel: The Snow Goose, and his cat themed books Jennie and Thomasina . All his writing tugs at the heart strings. If you are able to track down some of his books then give them a try. Despite his (by now) old-fashioned attitudes to women and families , he always writes a good story and as I said, you may need a box of tissues by your side.